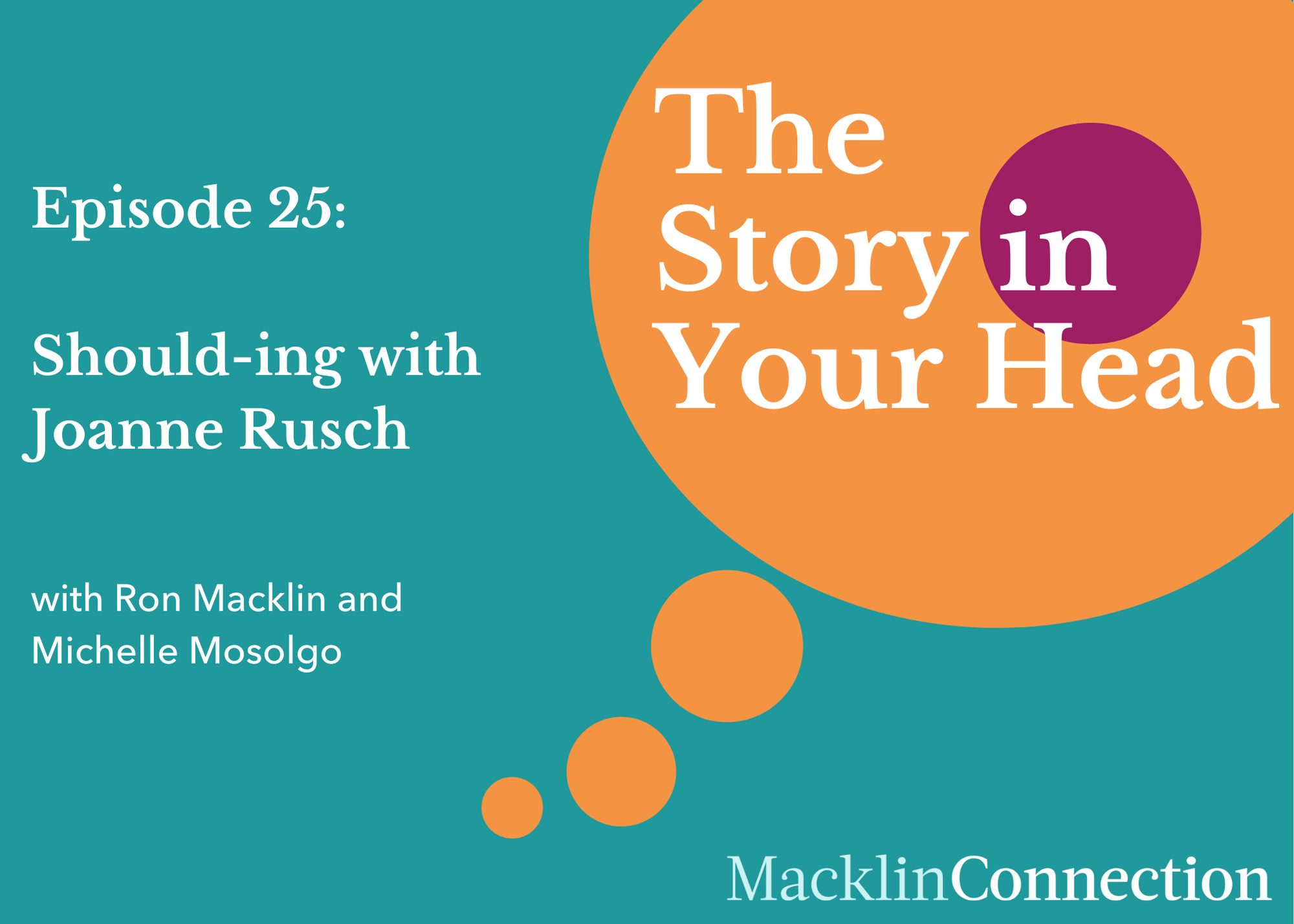 Michelle begins by reading the definition of the word “should”.

• She then details what the word means to her personally, and how it makes her feel.

• Michelle then asks Ron what the word “should” and “should-ing” means to him.

• Ron says “shoulding” is all of the things that he keeps telling himself he should do, but he lacks the time, energy, etc. that puts a burden and stress on him that takes him out of living in the present moment.

• He noticed that he will never be enough when he is “should-ing” on himself.

• Joanne follows up by saying that she has been working this word for a while and it now triggers her to just do that thing instead of saying she should do that.

• She also holds it as a way to shirk responsibility of things to happen in the future, or possibly shifting blame of things to others.

Michelle said that when she read the definition, it indicated obligation, but she feels differently.

• Michelle says that when she uses the word should, it doesn’t actually commit her to anything.

• She agrees with Joanne that it has an element of blame built into it, which is not a mood she is looking to bring into her life.

Michelle then asks Ron what practices he has around the word “should” and what actions he has taken around it.

• Ron says his best strategy is to speak it out loud so that it exists outside of his internal story.

• When he says it out loud, not only can others hear that story as well, making it larger than himself, but he also then audibly hears the words which activates a different part of his brain.

• He then says how he works to replace the word “should” with the word “choose” which helps keep his mindset in the present moment.

• Michelle agrees that switching “should” to “choose” really drives action, rather than inaction.

Michelle asks the group if they have any examples or stories where they caught the word “should” closing down opportunities, or not enabled them to do.

• Ron reflects on when he had a goal to ride his bike across Colorado, and said that he “should” ride the rest of the way across the state.

• He realized that by saying he “should” do that instead of what he really wanted to do, which was spend those next few days with his dad, kept him from being present and enjoying that time with his father.

• So he chose to not continue on his ride, but rather chose to spend that time with his dad instead.

Joanne reflects on how “should” also carries with it expectations, some or many of which may not even be your own.

• She found that she was carrying things with her that no longer served her anymore because she had a story of she “should” do that thing.

• She also realized that saying you should do something could also be a sign that you picked up expectations from other people.

• Continuing, Joanne says that if you’re able to let go of that “should” you can then refocus your efforts on what you truly want to accomplish.

Michelle asks the group what they do when they notice other people “should-ing,” and what lines they are able to toss them to help them.

• Ron says he speaks it out into the world in hopes of bringing it to the attention of the other person.

• He then recounts a story of when years later people say they “should” have done something differently in the past.

• By saying you should have done something in the past, you’re focusing on the regret piece of it, rather than focusing on the lessons you have learned and the growth that has happened since then.

• Joanne says asks people what they would have done differently if they could have, which usually helps them realize that what they should have done was not something they were in a position to do in the first place.

• She then digs deeper into this by asking what would they have had to give up in order to accomplish that thing they believe they should have done.

In this episode of “The Story in Your Head,” Ron, Michelle, and Joanne discuss the concept of “should-ing” and how their perception of that word has changed over time. They discuss ways to change your mentality around the word “should” from one of shirking responsibility and blame into something that drives self-discovery and action.