Wired For Success with Claudia Garbutt 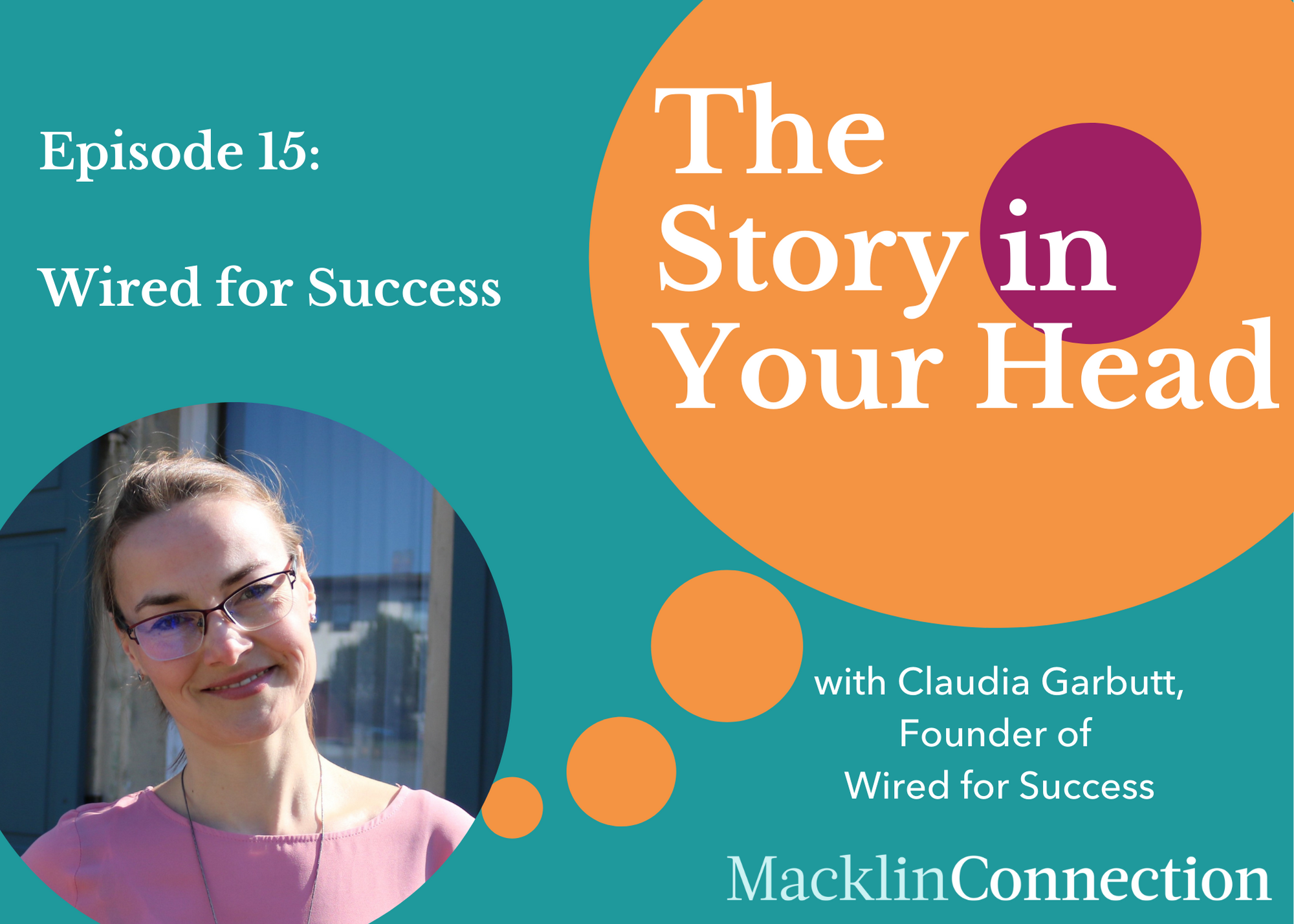 Ron asks Claudia: What is the first thing you notice when it comes to “noticing your own stories?”

Claudia says the first thing she notices is how much they’re holding her back. She shares a story about how when she became a mom, she decided not to go back to her old job. She didn’t know what other possibilities were out there. That’s when the negative stories showed up in her head.

Michelle asks: How did you change those stories? Claudia says it happened gradually, and it’s still a work in progress. She works on figuring out what things are holding her back, and most of them are focused on not being “enough.”

Ron asks Claudia for an example. Claudia shares that one of the stories in her head is that she hates public speaking -- especially speaking English in public. These are a couple of reasons that she started her podcast, Wired For Success.

Michelle tells Claudia that she relates to the “not enough-ness.” What does it mean to be enough? Claudia says that enough means that we don’t see the world through the filter of lacking something. We have to honor ourselves for who we are and what we can contribute to the world.
‍

Ron asks Claudia about the fear of doing her first podcast, fear that triggers our instinct to run away. How did she create the space to move forward?

Claudia says she tries to change her fear to curiosity. She calls it “kind curiosity.” Instead of looking at the worst-case scenario, she looks for the best-case scenario and how it can help the people around her.

What was it like for Claudia the first time she tried to help someone else with changing the story in their head?

Claudia says that for most people, it can feel easier to help other people than it is to help yourself. From the outside, it always looks so obvious what the other person should do. We all have our own blind spots. Coaching isn’t about telling people what to do, but helping them see in their blind spots. And so often, you can learn your own blind spots when they are reflected back to you.
‍

Claudia says that, when she thinks about authentic leadership, it’s about two main elements: self-awareness, and self-regulation. These help us understand ourselves better and make the switch from being reactive to responsive, and that’s when we can move into a space to change our way of thinking and create as part of a team.

We can sometimes get hung up on our own ways of thinking and see those as objective truth without taking into account others’ points of views, motivations, and experiences. We don’t see the world as it is: we see it as we are. Being an authentic leader is being aware of these filters.

Michelle shares an example: when she plays tennis with her husband, and she says “Let’s play on 5,” her husband interprets it as Michelle wanting to play until 5, when she meant she wanted to play on court 5. Michelle’s husband is worried about how long they’re playing, while she’s concerned about being closest to the tennis balls. It was just a misunderstanding that happened in 20 seconds, so imagine what can happen over a longer period of time.
‍

Claudia says that you have to question your beliefs and the assumptions. And if you do, maybe you can look and see if you have any beliefs or assumptions in the opposite direction -- the truth is usually somewhere in the middle.
‍

Ron asks Claudia: What is trust to you?

Claudia says for her, it means she can rely on them to keep their promises, they will show up when she needs help, and they will give her the benefit of the doubt if she’s offended them. It’s the basis of believing that someone has your best interest in mind when they do something.

Ron asks: Can you trust someone you’ve never met before? Claudia says yes; Ron says that they trusted Claudia to be on their podcast today even though they didn’t really know each other.

Michelle brings up Claudia’s point of someone giving you the benefit of the doubt when you’ve offended them. How does that show up for you, and what do you do? Claudia shares a story about her husband, who is from New Zealand. While she says his German is “excellent,” sometimes things get lost in translation. Sometimes communication breaks down, but they talk through what happened and what they really meant.

“You are more powerful than you think you are.” Michelle brings up this quote from Claudia’s website, and she asks her why she wrote it and what it means. Claudia says it goes back to those limiting beliefs and selling yourself short. Sometimes we feel like we can’t change or that our failures define us. But we can change the stories in our heads to enable ourselves to do more powerful things.

Ron asks Claudia about being a mom with young children and all the stories they’re making up in their heads.

Claudia says that it’s fascinating to see how they see the world because it can teach us a lot. They see the world without as many filters. Claudia is trying to be mindful in explaining to them how powerful they are. While she was always afraid of making mistakes, she wants to tell them that “sometimes you win, sometimes you learn.”

Michelle shares a story that she had stuck in her head about her daughter when she was a teenager, though now she’s 24, and it took some time for her to change the story she was holding and see her as a beautiful young adult. It shifted her entire orientation and relationship with her.

Wired For Success with Claudia Garbutt

Ron and Michelle, along with Wired For Success founder Claudia Garbutt, discuss the stories in our heads, being enough, and what it means to trust in this episode of “The Story in Your Head.”