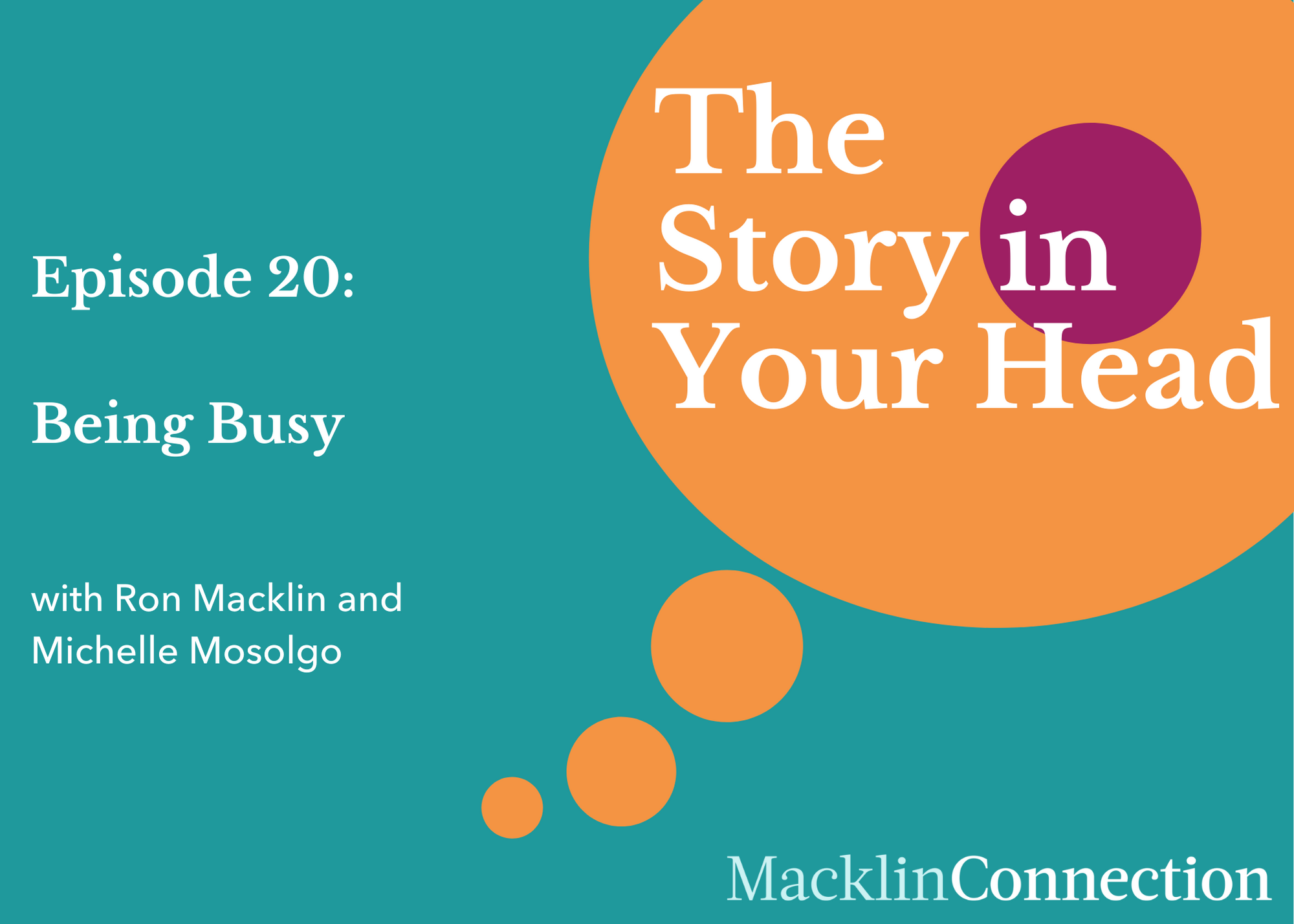 Michelle begins by asking Ron: what does it mean to be busy?

Ron says that he thinks back to growing up, and it was seen as a virtue to be busy. Being busy was equated with working hard. But now he has shifted his perspective, because you could be busy with something that doesn’t help you get closer to your goals. He feels it’s better to be strategic or technical when moving toward your goals rather than be busy.

Michelle agrees and says that what Ron said triggered some thoughts for her. When you get paid by the hour, it’s about being busy, and no matter what you actually do, you get paid, so it’s a linear amount of work. But when you say you’re busy, you sometimes have to ask yourself: busy at what? What am I producing?

She shares a story about a previous position she held where she was “babysitting” machines and it was a lot of busy work. But then she began thinking about how her knowledge could become exponential rather than linear by being more strategic.

Ron says that he eventually learned that people cared more about what he produced than the hours he put in. He shares a story about a previous position where his team needed to have faster outcomes, but they kept bumping into a problem: a requirement that they needed to meet a certain number of hours.

Everyone was assigned a certain amount of busy work because the assumption was that if there was a lot going on and everyone was busy, it was a good thing. But when they cut out 50% of the labor and the busy work, they were able to take a 40-day process down to 12, making it more efficient.

Ron acknowledges how it can be difficult in some ways when it comes to the people who work hourly -- they may not want to do less work because they depend on working for a set amount of time in order to get paid. But Ron’s company was able to help find future job sites for these workers so they weren’t left high and dry.

This caused many potential employees to want to come and work for them because there was a high level of predictability regarding their projects and the next jobs they could go to when the project finished.

They would also talk a lot with the workers to find out how they thought the job could be done most efficiently, and take their lead and listen.
‍

Michelle asks Ron: What about someone who feels like “I’m too busy?”

Ron says that some people have the story that they’re too busy. For those who are leaders -- managing others in a workplace, for example -- normally when they say they’re too busy, it’s often because they haven’t mastered the skill of delegation.

People want to add value, and it’s one of the main reasons they stay in a job. Leaders may be trying to direct everyone and tell everyone what to do, and that can make you too busy if you’re not delegating. And that doesn’t give you any space to create new things yourself.

For those who are individual contributors, it’s easy to get so deep into your work and be so busy that you’re not questioning what you’re doing or your methods. You may say things like “This is the way we’ve always done it,” and being too busy means you can’t find a new, more creative or strategic way to do their work.

Ron asks Michelle: What shows up for you about people who say they are “too busy”?

Michelle thinks back to one of her positions when she was a leader and they needed to hire a new person. It sounded like a lot of effort and time that she didn’t feel like she had -- paperwork, training, and more -- but she realized that either way, she would be in the same position in a month and she definitely needed the help. She says it was an example of “slowing down to speed up.”

Ron asks what happens if she doesn’t take the time to bring in the right people to help. Michelle says she’s been in that situation before too, and it wasn’t fun. You’re months in, making mistakes, working constantly, and you’re working overtime and over budget. And then you need months to recover from that.

Ron goes back to Michelle’s idea of “slowing down to speed up.” He says he had an early mentor who later worked for him, and he had a saying: “The ‘hurrier’ you go, the ‘behinder’ you get.” Ron says that all these years later, it still holds true: go slower and steadier, get help as you go, think through different designs and strategies. It always outperforms being hurried, busy, or working too hard.

Michelle thinks back to what Ron had said about needing to delegate. She says that it’s easy to feel like your team doesn’t have the skills needed for a certain task, which means you may feel like you need to do it all yourself. But it’s like being a hamster on a wheel where you keep trying but never get anywhere.

She says it’s important to bring in the people with the skills and knowledge to do the job -- or trust the ones you have -- and give them the space to figure it out.
‍
‍

Ron talks about Tossing Lines, as a chance to ask a question or share a vulnerable story with someone and give them a space to discover something.

He asks Michelle: When you see someone who’s on a hamster wheel -- even if they seem to be proud of the work they’re doing -- what lines can you toss?

Michelle says she would usually start by asking how that person is doing. They might start by saying everything is great, but eventually mention how tired they are. Then, she moves to: “What help do you need?”

She says this can be a hard question for people to answer. First, you’re finding out whether they’re willing to accept help. And then, they sometimes need to think about what kind of help would actually be useful.

Michelle notes that these questions can take 20 minutes or months to work through. But it takes some self-reflection.

Michelle then asks Ron what lines he uses in the same situation.

Ron says he also asks someone how they’re doing and allows them to “empty out.” He says he’s noticed that if you wait long enough, people will often tell you about what conflict they’re having. And then he asks, “So what’s your strategy here?”

Sometimes people don’t realize they don’t have a strategy. Then, asking how that strategy (or lack thereof) is working, can cause people to take the time to reflect. Sometimes they say it’s going well and they come back the next day and realize it’s not working at all.

Next, he’ll ask how they want it to be different. But Ron says he always avoids telling people what they should do because he believes people can create it.

Ron and Michelle discuss the value of having a network who is there to help you see that you’re on the hamster wheel -- even they sometimes find themselves laboring on something that isn’t helping them achieve their goals.

Ron and Michelle discuss what it means to be busy, slowing down to speed up, and tossing lines in this episode of “The Story in Your Head.”